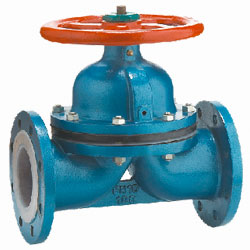 The characteristics of the diaphragm valve are as follows:

The most prominent feature is that the diaphragm separates the inner cavity of the lower valve body from the inner cavity of the upper valve cover, so that the valve stem, valve clack and other parts located above the diaphragm are not corroded by the medium, and the packing seal structure is omitted, and no medium leakage occurs. .
1. Diaphragm made of soft seal such as rubber or plastic has good sealing performance. Since the diaphragm is a vulnerable part, it should be replaced regularly according to the characteristics of the medium.
2. Due to the limitation of the diaphragm material, the diaphragm valve is suitable for occasions with low pressure and relatively low temperature.
3. Diaphragm valves can be divided into six types according to their structure: house type, DC type, cut-off type, straight-through type, gate type and right-angle type; the connection form is usually flange connection; according to the driving mode, it can be divided into manual, electric and pneumatic There are three types, of which pneumatic drives are divided into three types: normally open, normally closed and reciprocating.
4. Generally, it is not suitable to be used in pipelines where the temperature is higher than 60 degrees and transporting organic solvents and strong oxidizing media, nor is it suitable to be used in higher pressure pipelines. The diaphragm valve is a fluid system of 1.3×10-5～2.5X106Pa. The valve used to open or block the airflow.

The drive screw is driven by compressed air to move the valve core up and down, while pulling the diaphragm up and down to close and open. Features: compact structure, simple, small size, beautiful appearance; switch oriented, stable movement; small closing torque, long life, ≥300,000 times; diaphragm compression can be automatically adjusted, uniform pressure, reliable sealing; diaphragm installation The inlet spool adopts the push-in type, which is easy to replace;

1. This valve is composed of valve body, valve cover, valve stem, valve clack, diaphragm, and other driving parts.
2. The opening and closing of the valve is achieved by driving the valve stem nut by the connecting shaft of the electric device, and when the valve stem is moved in the axial direction, the valve flap is lifted and lowered.
3. When the power supply is interrupted due to a failure and the valve is in urgent need of opening and closing, first switch the “hand-electric switch handle” to the position engraved with the manual mark, and then turn the handwheel to open the flash door close. When rotating clockwise, the valve can be closed; otherwise, the valve can be opened. 4. When the electric operation needs to be restored, the “switching handle” must be switched to the position engraved with electric marks before electric operation can be carried out. 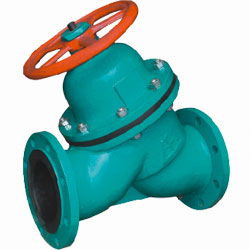 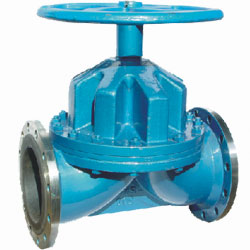